The crop has often helped shape poll outcomes in Malwa, which accounts for more than half the state’s production. Once thriving, soybean has suffered falling prices in the last few years.

“Malwa is India’s US Midwest and Indore its Chicago. And that’s only because of soybean.”

There is some truth to this statement by Davish Jain, chairman of the Soybean Processors Association of India (SOPA). Soybean in India has an American connection. The leguminous oilseed was hardly grown in the country till the mid-sixties. The first yellow-seeded soybean varieties were introduced by University of Illinois scientists, who conducted field trials at the Jawaharlal Nehru Krishi Vishwa Vidyalaya (JNKVV) in Jabalpur, Madhya Pradesh. Many of these varieties — with names such as Bragg, Improved Pelican, Clark 63, Lee and Hardee — were released for direct cultivation. By 1975-76, the all-India area under soybean had touched around 90,000 hectares.

But the revolution took place only after that — and in Malwa, where soybeans relevance, even vis-à-vis shaping electoral outcomes, may be comparable to sugarcane in western Uttar Pradesh. 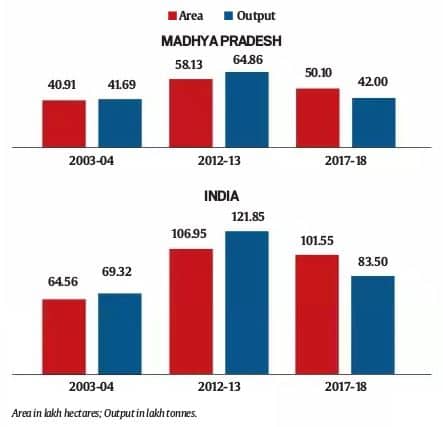 This plateau region of western MP — covering the districts of Dewas, Indore, Dhar, Ujjain, Jhabua, Ratlam, Mandasur, Neemuch, Shajapur and Rajgarh — traditionally grew only a single un-irrigated crop of wheat or chana (chickpea) during the rabi winter season. Farmers mostly kept their lands fallow during the Kharif monsoon season. The reason was the monsoon’s unpredictability: Even if the rains arrived on time, it could be followed by long dry spells. Sometimes, it rained so much that the fields would get waterlogged, damaging the standing crop. The best option, then, was to allow the soil to retain water from the monsoon rain and take a rabi crop using this residual moisture. 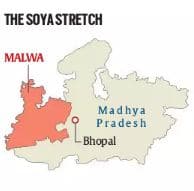